A study in 1992 conducted by the Scientiﬁc Advisory Board of the US Air Force targeted high cycle fatigue as the single biggest cause of turbine engine failures in military aircraft.  High cycle fatigue results in rapid, essentially unpredictable failures due to fatigue-crack propagation under ultrahigh frequency loading.  Furthermore, cracking often initiates from small defects which are associated with damage caused by a variety of drivers, including fretting and impacts by foreign objects.

In high cycle fatigue situations, materials performance is commonly characterized by an S-N curve, or stress-cycle curve, or fatigue curve, also known as a Wöhler curve. This is a graph of the magnitude of a cyclic stress (S) against the logarithmic scale of cycles to failure (N).

The S-N curve in the high-cycle region is sometimes described by the Basquin equation:

S-N curves are derived from tests on samples of the material to be characterized (often called coupons) where a regular sinusoidal stress is applied by a testing machine which also counts the number of cycles to failure. This process is sometimes known as coupon testing. Each coupon test generates a point on the plot though in some cases there is a runout where the time to failure exceeds that available for the test. Analysis of fatigue data requires techniques from statistics, especially survival analysis and linear regression.

The progression of the S-N curve can be influenced by many factors such as corrosion, temperature, residual stresses, and the presence of notches. The Goodman-Line is a method used to estimate the influence of the mean stress on the fatigue strength. 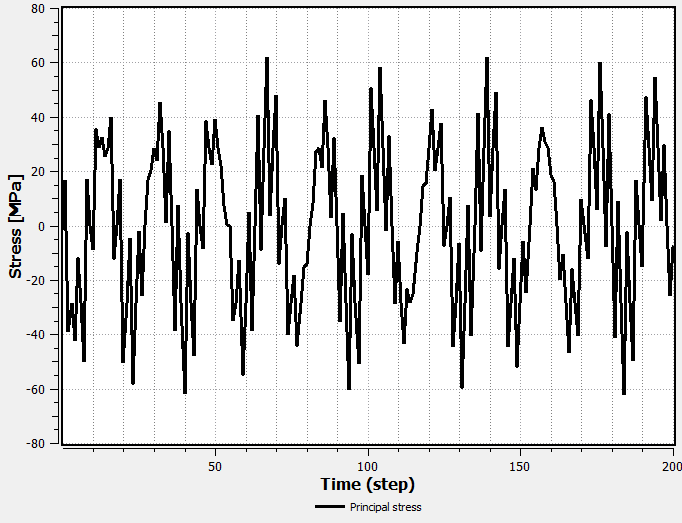 In practice, a mechanical part is exposed to a complex, often random, sequence of loads, large and small. In order to assess the safe life of such a part:

Since S-N curves are typically generated for uniaxial loading, some equivalence rule is needed whenever the loading is multiaxial. For simple, proportional loading histories (lateral load in a constant ratio with the axial), Sines rule may be applied. For more complex situations, such as nonproportional loading, Critical plane analysis must be applied.

In 1945, M A Miner popularised a rule that had first been proposed by A. Palmgren in 1924. The rule, variously called Miner’s rule or the Palmgren-Miner linear damage hypothesis, states that where there are k different stress magnitudes in a spectrum, Si (1 ≤ i ≤ k), each contributing ni(Si) cycles, then if Ni(Si) is the number of cycles to failure of a constant stress reversal Si (determined by uni-axial fatigue tests), failure occurs when:

C is experimentally found to be between 0.7 and 2.2. Usually for design purposes, C is assumed to be 1. This can be thought of as assessing what proportion of life is consumed by a linear combination of stress reversals at varying magnitudes.

Though Miner’s rule is a useful approximation in many circumstances, it has several major limitations: In Fracture mechanics, Anderson, Gomez, and Paris derived relationships for the stage II crack growth with cycles N, in terms of the cyclical component ΔK of the Stress Intensity Factor K

where a is the crack length and m is typically in the range 3 to 5 (for metals), which states that the rate of crack growth with respect to the cycles of load applied is a function of the stress intensity factor; this is named Paris’ law.

This relationship was later modified (by Forman, 1967) to make better allowance for the mean stress, by introducing a factor depending on (1-R) where R= min stress/max stress, in the denominator.

A number of models exist to compensate for mean stresses:

These models work in the same manner.  The stress amplitude that is to be used in Basquin’s law is corrected according to the mean stress σm and yield stress σy or tenstil stress σu.